Kyotomotors is back! Check in Wednesdays for commentary on the age of abundance, climate change
and the dawning of the post-carbon eventuality...

Did Somebody Say "De-growth"?

Surprisingly, though somewhat under the radar, the issue of something called “de-growth” came up during Canada’s recent English language debate, where a citizen asked about it in the context of ecological strain due to climate change – suggesting, I think, quite rightly, that it was an appropriate response to the problem. Unsurprisingly, even Elisabeth May’s response was all about economic “transition” intended to steer well clear of anything like economic contraction, and unlike the sound of “de-growth” hers is a palatable proposition. In other words, she’s careful to say what people want to hear.

If sacrifice is the taboo for the individual consumer in the age of abundance, “de-growth” is its equivalent in the economic and financial spheres of contemporary life. Any politician knows that to conjure either one in today’s culture of perpetual progress, is tantamount to career suicide. It’s as though growth is equated with all things good, and its opposite is therefore evil. It’s taken as a given. Non-negotiable.

The only problem is that perpetual growth on a finite planet is a physical impossibility, and this inconvenient truth is at the heart of our ineffectual responses to climate change, from Al Gore to the Paris Agreement, and (dare I say) to Greta Thunberg.

Anyone familiar with the basics of the Climate Change movement/debate, has heard about emissions targets, usually expressed in terms of percentages below annual output of a given year (1990 or 2005 are common). Our current aim is for what is referred to as the “Paris targets”, but they cannot be defined succinctly, because they will be decided upon differently by each participating country – which is fair, but it’s also a great way to ensure many players will drag their feet.

Summit after summit (we’re up to “COP25” now) we have moved the goalposts in this game of climate action, dragged our feet in ratifying, and have simply failed to meet targets. Before Paris we spoke of Copenhagen, and Cancun; before that of Rio, and originally of Kyoto – we are a quarter of a century into Climate action, and by and large the mechanisms for implementation and enforcement have been largely toothless, given that overall emissions globally have gone up year after year. 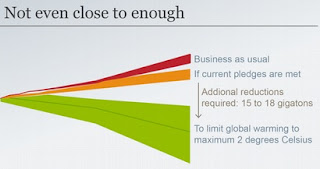 The underlying reason for that is not too difficult to explain, and it speaks to the allergy to sacrifice I’ve alluding to in recent posts. But I think it’s helpful to look at the roots of the matter from a slightly different angle, which speaks to our economic model for prosperity, and our allergy to “de-growth”, or contraction.

In our current system of creating wealth through industrial production, energy has always been the key ingredient: coal, oil, and gas leading the way. Returns on investment have always been underpinned by these historically negligible costs that bear enormous returns in terms of the ability to do work. The net effect is that growth is by definition coupled to CO2 emissions. If we start talking about cutting emissions, we are by definition speaking of cutting energy use, and therefore of bringing the notion of “de-growth” into the conversation. But in true “have our cake and eat it too” form, we have tried to insist that growth remains on the table. So long as it does, the question of climate change will remain a predicament, from which there is no real escape, and not a problem that can be solved via practicable measures.

Now of course, the extent to which some renewable sources of electricity can alter this equation is definitely part of the more sane approaches to the challenges of the near future. But having unreal expectations of growth sustained by “renewables” is not helpful. Folding de-growth into the recipe offers a whole new area in which gains can be made.

I don’t know if people can get their heads around what de-growth actually means. I’m not even sure I know what that would look like globally in twenty to fifty years. It certainly should not simply be a matter of have-nots of the world going with even less access to the amenities of modern life – although that certainly is the risk, given our track record of concentrating wealth in the hands of the few. By opting for a de-growth path, we would be entering into uncharted territory, but then again, by wading into the deep waters of climate change, we are already doing that. We may now have to choose between the lesser of two evils. Either way, one of the best things to do now, is to embrace a low carbon lifestyle and be prepared for new ways of thinking about energy. It’s a theme I aim to explore further here at Kyotomotors.